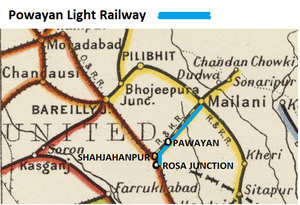 The Powayan Light Railway was a 2ft 6in/762mm narrow gauge(NG) railway .
The Powayan Steam Tramway Company was the owner of the railway and ‘Steam Tramway’ was the first description.
In some references also described as the Shahjahanpur-Mailani Tramway.

The 1918 Administration Report records that the ‘Powayan Light Railway’ was being managed and operated by the ‘Rohilkund and Kumaon Railway’(R&KR) between Shahjahanpur and Mailani,a length of 38.86 miles (62.2km) [4]

It is reported that ‘Powayan Light Railway’ “from Shahjahanpur via Powayan to Mailani, which was constructed by a subsidised company and worked as part of the R&KR System since 17 Dec 1900, was dismantled during WW1 and acquired by the State in 1920-21” [5]

An on-line search of the IOR records relating to this railway [7] gives 5 references. The most important being:-

BL Catalogue comment - Sir Edward Bosc Sladen Collection: "Photographs of the route of the Pawayan Steam Tramway, Shahjahanpur District - Collection of prints, somewhat yellowed and faded, mounted on pages from an album, with captions written beneath. The collection consists of views of bungalows at Rosa (presumably for Europeans employed in the Rosa sugar and rum factory), and views of trains on the route of the Powayan Steam Railway between Shahjahanpur and Mailani."