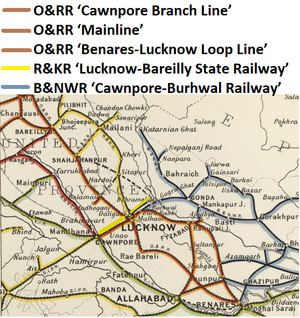 O&RR Cawnpore Branch Line
The ‘Oudh and Rohilkhand Railway ’(O&RR) constructed their first line from Lucknow to Cawnpore, this Broad Gauge(BG) line opened in April 1867 from Lucknow to the east bank of the Ganges River facing Cawnpore, then from 1875 over the ‘Ganges River Bridge, Cawnpore’ to join the ‘East Indian Railway’(EIR) at Cawnpore Junction.

O&RR Mainline
Expansion continued with the ‘O&RR Mainline’ from Moghal Sarai reaching Lucknow in 1872-73 and fully completed to Saharanpur in 1893-94.

The ‘Great Indian Peninsula Railway - GIPR -Cawnpore Branch’ , BG had a ‘Running Agreement’ over the O&RR track from Cawnpore into Lucknow [1].
This line also operated into the BG ‘Lucknow Charbagh Station’ - see ‘Stations’ below

R&KR Lucknow-Bareilly State Railway
The ‘Rohilkund and Kumaon Railway’ (R&KR) worked the ‘Lucknow-Bareilly State Railway’ Metre Gauge(MG) line from Lucknow to Sitapur in 1886 and on to Bareilly - see separate page for development of R&KR
This R&RKR line operated into the MG ‘Lucknow Junction Station’ - see ‘Stations’ below
This line included the 3 mile(5km) section from Aisbagh (in the western suburbs of Lucknow) , over the Gomti River Bridge to Daliganj (in the northern suburbs of Lucknow.
This line was later used by the B&NWR as part of the ‘Cawnpore-Burhwal Railway’ - see below

B&NWR Cawnpore-Burhwal Railway
This line was constructed as a State MG line from Cawnpore via Lucknow to the B&NWR at Burwhal, 100 miles(160km), fully opened in 1897, formed by:-

The first Broad Gauge (BG) station at Lucknow, served the ‘Oudh and Rohilkhand Railway ’(O&RR) from its opening in 1867 - see ‘Railways’ above
At the time of its construction the first station building was located within a large mango orchard away from the town. Prior to the advent of rail transport goods movement between these cities was done by bullock carts which took two days between Cawnpore and Lucknow [2].
The station building was developed over the years at Charbagh in the southern suburbs of Lucknow

Built at a price of ₹ 70 lakhs, Lucknow Charbagh was designed by J. H. Hornimen. The foundation of the railway station was placed in March 1914. The building was completed in 1923. A major role in its design and planning was carried out by Chaubey Mukta Prasad, a consulting engineer for Ms Lanebrown and Hulett It has a large garden in front of the building. It incorporates the mix of Rajput, Awadhi and Mughal architecture and has a palatial appearance. Architecturally, it is considered one of the most beautiful railway stations in India [3].
The station served the O&RR - see ‘Railways’ above, which was absorbed into the ‘East Indian Railway])’(EIR) in 1925. It also handled GIPR traffic under the ‘Running Agreement’.
This station is given the code LKO

‘Lucknow Junction Station ‘ is situated right next to ‘Lucknow Charbagh Station’ and was the original station serving the ‘Rohilkund and Kumaon Railway’ (R&KR) Metre Gauge(MG) - see ‘Railways’ above
The station served the R&KR, as well as the B&NWR traffic under the ‘Running Agreement’
The Station has been converted to broad gauge with the station code LJN [4].