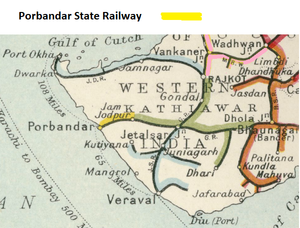 From 1919 it was worked by Gondal Railways(GSR) until 1948 when it became part of the newly formed Saurashtra Railway.

From Porbandar the line connected to the ‘Gondal State Railway’

The branch ran from Ranavav, about 20km east of Porabandar to a quarry

An on-line search of the India Office Records (IOR) records held at the British Library relating to this railway [3] gives the following:-