In 1911 the Jetalsar-Rajkot Railway , which had been worked as part of the GSR was formally brought under the administration of the ‘Gondal-Porbandar Railway’ following the breakup of the ‘Bhavnagar-Gondal-Junagad-Porbandar Railway’(BGJPR) coalition.

In 1919, ‘Gondal Railway’ took over the sole working of the ‘Porbandar State Railway’(PSR) and the railway became the Gondal State Railway(GSR)

In 1948, GSR became a part of Saurashtra Railway. 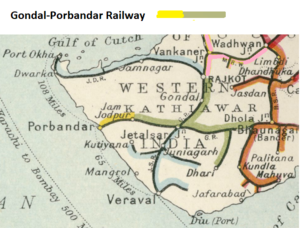 From Jetalsar (with its connections); via Gondal to Rajkot (where it connected to the ‘Jamnagar and Dwarka Railway’ and the ‘Morvi Railway’ See separate page for History and details

From Porbandar the line connected to the ‘Gondal State Railway’

The branch ran from Ranavav, about 20km east of Porabandar to a quarry

A branch line from Khijadiya (on the ‘Mainline’ between Dhasa and Jetalsar. Owned by the [[Gondal State|State of Gondal. See separate page for details

An on-line search of the India Office Records (IOR) records held at the British Library relating to this railway [2] gives several entries, the most relevant as follows: -