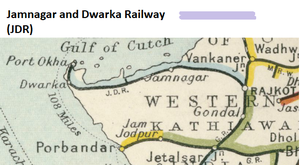 The first section of what was then called the Jamnagar State Railway connected Jamnagar to the Bhavnagar-Gondal-Junagad-Porbandar Railway at Rajkot. The metre gauge(MG) with a length of 50 miles(80km) opened for traffic in Apr 1897 [1] [2].
From Jamnagar a goods only branch, 4 miles(6.4km), to the port of Bedi Bandar also opened in Apr 1897 [3].
The line had been constructed for the Nawanagar State and was worked as part of the Bhavnagar-Gondal-Junagad-Porbandar Railway (BGJPR) system until 1911.
The Coalition ceased to exist on 1 April 1911 and the line was worked independently as a separate concern.
See separate page for more information

The further extension from Kuranga to the port of Okha , known as the ‘Okhamandal State Railway’, was constructed by the Maharaja Gaekwar of Baroda and initially worked by the ‘Baroda State Railway’ from opening in Nov 1922, a length of 37 miles(60km) [3]
See separate page for more information

The ‘Statistics of Working’ Report for 1937 [3] show the year-by-year financial results for the ‘Jamnagar and Dwarka Railway System’ with a total of 157 miles(253km) as follows:-