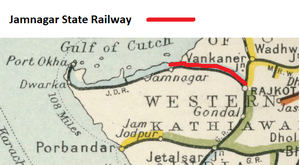 Construction commenced in 1893 with Lord Harris ++(see footnote), the Governor of the Presidency of Bombay, turning the first sod in the construction of the Rajkot to Navanagar line [1].

The railway from Rajkot to Jamnagar in the Kathiawar peninsular, opened in 1897 with an extension for goods traffic to Bedi Bunder Port, 4 miles(6.4km) north of Jamnagar . The line was a metre gauge(MG) line with a length of 54 miles (87km) and constructed by the Princely Navanager State [2].

This line was also called the Navanagar State Railway after the district around Navanager and connected to the Bhavnagar-Gondal-Junagad-Porbandar Railway(BGJPR) system at Rajkot. The line was worked as part of the BGJPR)system until 1911.

The BGJPR administrative coalition was dissolved in 1911 with the constituents going their independent ways. The 'Jamnager State Railway' worked its own railway from Rajkot to Jamnagar; with the Junagadh State Railway taking over the working of its system from Jetalsar to Veraval including its branches.

In 1923, when the line was extended westwards to Kuranga and Dwarka where the system joined the Okhamandal State Railway. The two being renamed the Jamnagar and Dwarka Railway(J&DR) [3], being responsible for the operation and maintainence of the two railways and linking Rajkot to Port Okha on the Gulf of Cutch,.

See Jamnagar and Dwarka Railway
and Kathiawar Peninsula Railway and Tramway Systems for the timeline and map showing the relationship to other railways in region.