In 1869 a survey was undertaken and the ’Junagadh-Veraval Railway Proposal ‘ concluded that a Railway line from Junagadh to Veraval was feasible but the cost of 40 to 50 Lakhs of Rupees was too high for the Junagadh Durbar to go ahead. Proposals for a light railway system were to be looked at. [2].

In 1872 another line was proposed and the route from Veraval to Junagadh and Dhoraji was surveyed by Mr A W Forde C E, but the cost was beyond the means of Junagadh Durbar. This proposal came to nothing [3]. Construction finally commenced in 1886 from Jetalsar to Junagadh City in 1888 and onward To Veraval 1889,
Initially described as the Junadagh-Veraval Railway.

Development of the Junagadh State Railway 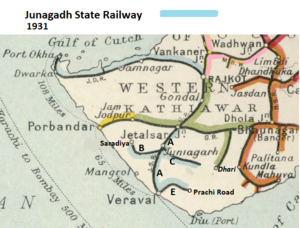 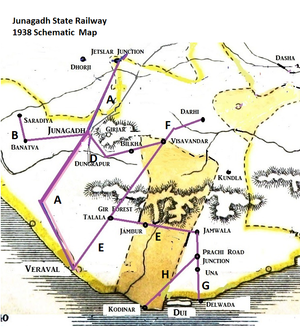