The Satpura Railway was a 2ft 6in/762mm narrow gauge(NG) network developed by the Bengal Nagpur Railway(BNR) from 1903 to 1913. The name ‘Satpura’ appears to have been adopted to describe the network after the ‘Satpura Range’ of hills in the Central Provinces [1].

Nainpur was the focal point of the network which connected Jubbulpore with Gondia, Mandla Fort, Chhindwara and Nagpur [2].

At Nagpur and Gondia there were connections with BNR's Nagpur Chhattisgarh section broad gauge(BG) mainline that crossed the Satpura network.

Some ten years after the Bengal Nagpur Railway Company(BNR) was formed in 1887, engineering surveys were carried out in the then Central Provinces with a view to open a low-cost railway that would unite the region into a whole. The object of the railway was two-fold: first, to open up the agricultural and mineral resources of the region; and secondly, to safeguard the inhabitants of the area should a famine arise. The gauge selected for the purpose was 2 feet 6 inches narrow gauge(NG) [3] 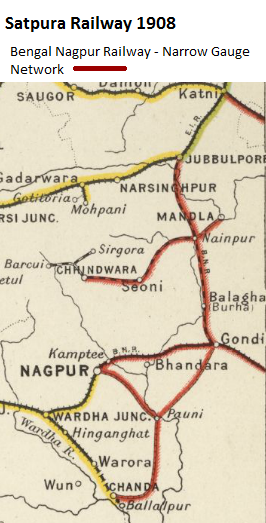 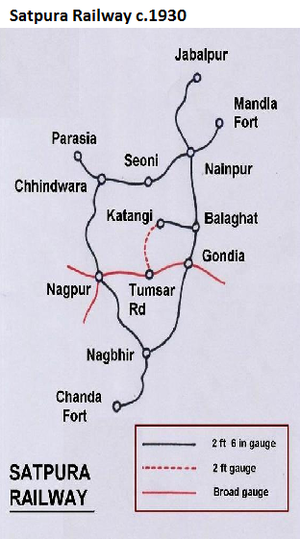 BNR signed a contract with Government of India(GoI) for the Narrow Gauge Satpura Railway on 23rd January 1902 for constructing the Gondia-Jubbulpore, Nainpur-Mandla Fort, Nainpur-Seoni-Chhindwara lines. [4]

The 1936-37 “Report on Indian Railway” [5] gave the Satpura Section of the Bengal Nagpur Railway as having a route mileage of 626 miles (1007km). The network comprising this extended line length has not been determined.

Information taken from the” Administration Report for Railways 1918”

Chhindwara-Pench Coal Fields Railway opened from the Pench and Kanhan coalfields to Chhindwara; where it connected to the Satpura Railway network, 1906-7. Length 22 miles(36km)

Tumsar-Katangi Light Railway, a a 2ft/610mm narrow gauge(NG)private line built to carry manganese ore deposits found in the region; this line ceased operation in 1929. The line interchanged with ‘Katangi Branch Line’ of the Satpura network at Katangi; it also interchanged at Tumsar Raoad with BNR's Nagpur Chhattisgarh section broad gauge(BG) mainline that crossed the Satpura network.