The Sukkur-Dadur Railway is a description of a strategic broad gauge(BG) section of the Sind-Pishin State Railway from Sukkur northwards towards Quetta constructed in 1879. 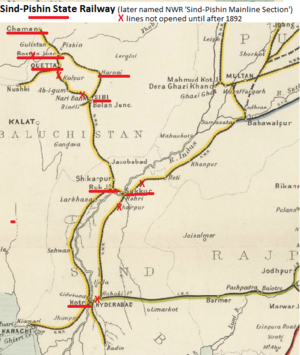 The military situation which became the 2nd Afghan War (1878-80) created the demand to urgently extend the railway towards the Afghan border. From Ruk a junction was created and the line forced northwards under Military supervision supplemented by engineers deployed from the Railway Branch of the Public Works Department(PWD).

Reports of the time described this as the Sukkur-Dadur Railway:-