The Sind-Pishin State Railway was a broad gauge(BG) line that ran up to the border with Afghanistan. 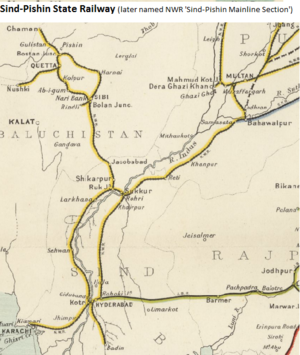 Commencing from Sibi; at Nari, 500 feet ASL(above sea level) and 459 miles from Karachi, it entered the Nari Gorge through a tunnel and then followed the river by crossing it by six bridges built in Portland Cement Concrete. Then it traversed the Kuchali defile. From Babar Kachh to Harnai it traversed six further bridges, before rising 425 feet in 7 miles between Babar Kachh to Kuchali and then 560 feet in 13 miles between Dalujal and Spintangi. Harnai was 2,950 feet; Nakus 3,362 feet; Sharigh was reached at 3,963 feet then it dropped down to Khost before going up to Dirgi at 4,756 feet. From Dirgi the line rose at 1 in 44 crossing the Chapper Rift to Mangi, traversing a steady 1 in 45 and a series of tunnels and bridges including the Louise Margaret Bridge, which was 225 above the river bed. Four miles on from Mangi was the Mudgorge region which extended five miles to Kuchali, a wilderness of boulders and clay.

From Kachh the line descended rapidly and crossed itself near the 566 mile mark, passed through Fuller's Camp and Khanai at 5,487 feet, and reached Bostan at 5,154 feet. There is joined the Bolan Railway from Quetta and turned north toward the Khojak and Chaman. The section from Bostan to Chaman, some 62 miles, opened in january 1888 and fully through to Chaman in January 1892. The main work here was the Khojak Tunnel and was the longest in India.