The Kandahar State Railway, broad gauge(BG), opened c.1881, ran only from Sibi and then as far as Rindli § see note [1]

The line was not constructed beyond Rindli and never reached Kandahar in Afghanistan [3]. 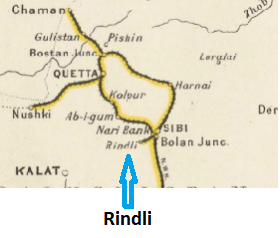 § Note Rindli - from Sibi the line ran south-west, skirting the hills to Rindli, and originally followed the course of the Bolān stream to its head on the plateau. The exact location of Rindli has not been determined, it is showing on the 1909 Map in the “Imperial Gazetteer” [4] as a short branch, estimated at 20 miles(32km) south west of Sibi and Bolan Junction

The ‘Kandahar State Railway’ joined with the southern section of the ‘Sind-Pishin State Railway’ and in 1886 amalgamated, with other railways, to form ‘North Western Railway’(NWR).

The destructive action of floods, however, led to the abandonment of this alignment. There is no mention of this line in the 1918 “Administration Report on Indian Railways” [5] where it would have been listed under the ‘North Western Railway - Frontier Military Section’ as a branch of the ‘Sind-Pishin Section’.