- a sub-section of the Indus Valley State Railway(IVSR) page 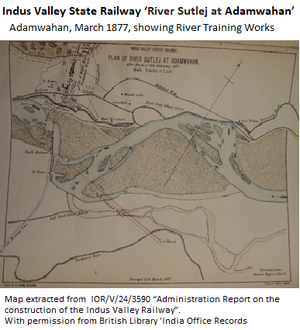 The Sutlej River Conservancy Division of the Indus Valley State Railway(IVSR) was formed in 1873 for the express purpose of controlling the Sutlej River, and endeavouring to restrain its oscillations within fixed limits. The River Training works were a necessity to enable the construction of the IVSR particularly concerning the Sutlej Bridge ( linking Bahawalpur and Adamwahan) and the river banks and bunds.

On completion of the construction of the the Sutlej Bridge in 1878 and the opening of the IVSR line between Kotri and Mooltan((Multan) the Division was handed over to the Public Works Department.

During 1873 an Executive Division was formed for the express purpose of controlling the Sutlej River, and endeavouring to restrain its oscillations within fixed limits. The operations undertaken consisted of laying in floating obstacles secured at the top to empty casks, as buoys, and anchored below, and formed sometimes of coarse netting, sometimes of single ropes, with brushwood attached and other such expedients, which, by checking the current, should cause a deposit of silt and turn the course of the stream. Some success attended these operations, and the fair-weather stream was driven into a fairly direct channel, to which it was hoped the first freshes might take, and a good lead be thus given to the stream when it came down in flood. Nature favouring, these hopes were realised -the violent oscillation of the stream near the colony of Adamwahan, which had caused much damage during the previous two years, was interrupted, and the river assumed a fairly direct course. The floods were monitored at Reti and Ghotki as well were not severe. However, the floods of 1874-75 had an adverse effect on the lower part of the line with the railway submerged between Bhan and Sehwan. Sehwan Station was submerged and a description at the time stated, “The station building at Sehwan was submerged to such a depth that a boat entering by one door passed out through another”. The proposal was to raise the embankment but not to put extra waterways to let the water through. In subsequent years repeated failure of the protecting Bunds made this inevitable. The floods of 1875 were extraordinary and the line between Channi Gote and Noorwah. Again in 1877 there were excessive floods on the Sutlej, Chenab, and Indus Rivers. At Adamwahan the Sutlej rose to 380.72 above sea level, being 1.32 feet higher than that recorded in 1875, and 1.72 feet above the flood height recorded as the highest when the designs for the bridge were prepared. At Sukkur the Indus reached 15 feet 10 inches on the gauge, reading 5 inches higher than 1875, and 1 foot 5 inches higher than in 1874. 2 years later the floods inundated Ghotki town and station but thanks to the improvements made and the flood openings further down the defences held. Later in the year flash floods in September this was so fierce that a train full of earth wagons standing in the cuttings at Laki was swept away in to the valley below by the force of the water rushing through them. This led to an immediate review of the drainage in the cuttings so as to let any later floods pass without any damage [1].