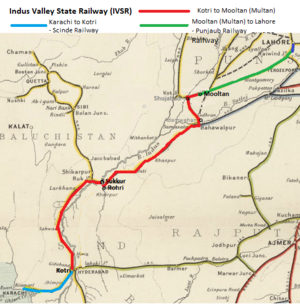 The Indus Valley State Railway(IVSR) was constructed by the Government to provide a rail link between Kotree(Kotri) and Mooltan((Multan). This was to complete a rail connection from the port of Karachi to Lahore by linking two lines:-

The section between Kotree(Kotri) and Mooltan((Multan) was linked by the ‘Indus Flotilla’ also owned by the ‘Scinde Railway Company’ thus providing a through service from Karachi to Lahore.

On the 1st July 1878 the IVSR line was officially opened for traffic from Multan down to Kotri and in full operation on the 27th October 1878 with the opening of the ‘Sutlej Bridge’, completed in March 1878 and inaugurated on 7th June 1878 to be renamed the ‘Empress Bridge’ - see separate page .

At the River Indus crossing linking Sukkur to Rohri a ferry was used whilst the engineering challenge of the ‘Sukkur Bridge’ was under construction. On completion in 1889 this was renamed the ‘Lansdowne Bridge’ - see separate page .

The ‘Scinde Railway Company, with Mr W P Andrew as its Chairman, in about 1863 made application to the Government for a concession to construct a railway between Kotree(Kotri) and Mooltan((Multan) thus to join the 'Scinde Railway' and the 'Punjaub Railway' to provide an unbroken rail link from the coast to the Punjaub(Punjab).

The following is recorded in a letter dated 4 June 1869 to the Duke of Argyll, Secretary of State for India” from Mr W P Andrew, Chairman ‘Scinde Railway Company’ [3].
“The Secretary of State for India authorised the Scinde Railway Company’, in the year 1863, to engage a staff of engineers for the purpose of surveying the country between Kotree(Kotri) and Mooltan((Multan).

Therefore 6 years had passed and clearly no decision had been reached by the Government authorising the railway to be constructed, meanwhile of course, the ‘Indus Flotilla’ was providing the “missing link” (as it came to be known).

The reasons for the Government to fail to come to a decision are several, all analysed in the later pages of the 4 June 1869 letter[3]. There were three possible routes each with their own “political aspects; the commercial and the engineering features”:-,

There were significant differences of opinion on the merits of each route with heated discussions and letters. As a consequence by June 1869 there was still no prospect of a decision. By this time it was clear that the construction of this railway would be a State venture and became named the ‘Indus Valley State Railway’

Later in 1869 the Government of India ordered that a ‘Rail Gauge Committee’ be established in order to recommend the future ‘Rail Gauge’ for the railways of India. There were extreme differences of opinion and the outcome was that the Metre Gauge (MG) would be adopted for all new constructions undertaken by the State .
This highly controversial decision by the ‘Rail Gauge Committee’ is examined in detail on a separate page.

By June 1871 it was reported that the Metre Gauge “Indus Valley Railway ...northern portion had been laid out, and is about to be commenced .... the lower division is beset with difficulties from inundations. A committee is investigating the route on either side of the river, and will report which they consider to be the more favourable [4]. The final route chosen was the the 3rd Route from Kotree(Kotri) crossing the river at Sukkur to Mooltan(Multan) and construction of commenced in Nov 1871.

Meanwhile the consequences of the break of Gauge from BG to MG at Kotree(Kotri), and MG to BG at Mooltan(Multan) caused heated argument, papers and letters both in London and in India.
These 'Rail Gauge Deliberations' were complex and are the subject of a separate page
But can be summarised as follows:-.

As a consequence, the ‘Middle’ section works were closed, and work was concentrated at both the ‘North’ and ‘South’ Divisions to widen the embankments. In the ‘North’ section the line from Multan to Hamdi was converted to broad gauge(BG) and by April 1876 the line was open to Adamwahan connecting it directly to Calcutta and Bombay. In the ‘South Division’ by 1876 construction was in progress. The ‘Sutlej Bridge’ was completed in March 1878 and inaugurated on 7th June 1878 to be renamed the ‘Empress Bridge’. Finally the IVSR line was in full operation on the 27th October 1878
See separate page ‘Broad Gauge Construction’ for full details

A Conference was held at Lahore in November 1878 and a proposal was made by the Honourable Member of Council for Public Works to the Officers of the Scinde, Punjaub & Delhi Railway Company (SP&DR), that they should take over the working of the traffic of the Indus Valley State Railway to which the Directors of the Indus Valley State Railway agreed [8].

In 1886 the North Western Railway(NWR) was formed by the merger of the IVSR with the SP&DR and other railways. The ‘Sukkur Bridge’ was under construction and on inauguration in March 1889 was renamed the ‘Lansdown Bridge’ - see separate page thus providing an unbroken BG route from Lahore to the port of Karachi.

Unfortunately, there are no Indus Valley State Railway (IVSR) Staff agreements held at the British Library in the India Office Records(IOR).

Some of these staff were mentioned at the inauguration of the ‘Sukkur Bridge’ when it was named in 1878 the 'Empress Bridge. See Empress Bridge#Inaugeration for details.

However the following have been identified from other sources:-