Originally known as the Sukkur Bridge and renamed the Lansdowne Bridge on inaugeration in 1889, this was a railway bridge over the River Indus in upper Sind which connected the towns of Sukkur and Rohri. Also referred to as the ‘Indus Bridge’ in some documents.

Lansdowne Bridge provided the last link in the unbroken broad gauge(BG) North Western Railway (NWR) connection from Lahore to the port of Karachi.

The Indus Valley State Railway had reached Sukkur in 1878 and the steam ferry that transported eight wagons at a time across the Indus between Rohri and Sukkur was found to be cumbersome and time-consuming. The opening of the Lansdowne Bridge in 1889 solved this bottleneck and thus port of Karachi was connected to the railway network

In 1886 the North Western Railway (NWR) had been formed by amalgamation of the Indus Valley State Railway, the Sind, Punjab and Delhi Railway(SP&DR) and others.
(The SP&DR had absorbed the ‘Punjaub Railway - northern end Lahore-Mooltan section' and the ‘Scinde Railway -southern end Kotri-Karachi section).
With the completion of the bridge in 1889 the NWR ‘Ghaziabad-Karachi Mainline’ provided the through connection under one operator.

A crossing was considered essential to link Lahore with the major port of Karachi on the Arabian Sea, and the section where the Indus is divided by the island of Bukkur was chosen as the most advantageous. Bridging the smaller Sukkur channel was straightforward, since its rocky bottom provided a solid foundation for masonry piers, but spanning the wider Rohri channel was a more challenging task, since its silty bottom would not allow pillars to be employed.

Many different designs for the bridge had been considered from the mid 1870’s onwards (see ‘ Chronology’ below). Finally Alexander Meadows Rendel, Consultant Engineer was called in and he proposed a design consisting of two anchored cantilevers, each 310 feet (94M) long, carrying a suspended span of 200ft (61M) in the middle. This design was considered feasible and Westwood, Baillie and Co of London commenced the steelwork for the girders [1] [2] [3]

Construction started in 1887 with the arrival of the steelwork and when it was completed in 1889 was the largest cantilever bridge in the world, the bridge came to be known as the 'Lansdowne Bridge'[4]. The bridge provided the railway link between Lahore, in the heart of the granary of British India, and the port of Karachi on the Arabian Sea. 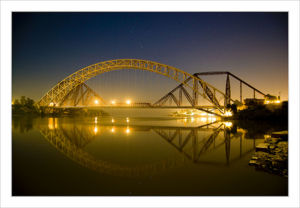 The bridge at night (behind Ayub Bridge) 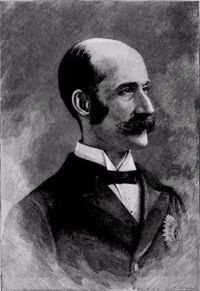 It was named after Lord Lansdowne, the Viceroy at that time. The bridge was opened by Lord Reay, Governor of Bombay on 25 March 1889.

An on-line search of the India Office Records (IOR) records held at the British Library relating the bridge constructions over the River Indus [6] gives the following:-

These records have not been examined and may provide additional information