The Sutlej Bridge, which on inauguration in 1878 became the Empress Bridge was also known as the Adamwahan Bridge .

The bridge carried the Indus Valley State Railway(IVSR) broad gauge(BG) and linked Bahawalpur and Adamwahan over the Sutlej River. The bridge was opened in 1878 and completed the link between Kotri and Mooltan((Multan).

The opening of the 'Empress Bridge' completed the rail BG connection from the port of Karachi to Lahore (With the exception of the crossing of the Indus River in Upper Sind between the towns of Sukkur and Rohri. This crossing was provided by a steam ferry that transported eight wagons at a time and remained operational until the opening of the Lansdowne Bridge in 1889.)

The IVSR, which included the ‘Empress Bridge’, was merged with other railways in January 1886 to form the North Western Railway(NWR). 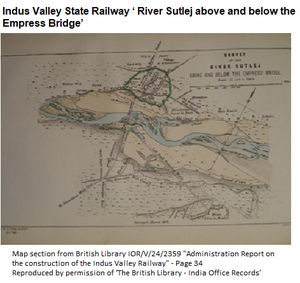 The designer was Alexander Meadows Rendel working to the following specification "The bridge to consist of 16 spans of 264 feet between centres, 250 feet in the clear. The piers and abutments to be founded each on three cylinders of brickwork 18 feet 9 inches diameter arrange in line, sunk to a depth of 100 feet below the dry weather water level. In 1874 the basic work of clearing and setting up the base from which to work was completed and 6 foundations 3 on each side were laid. These comprised of 18 wells. Each of the piers was designated a letter 17 in all from A to R the length of the bridge is 4224 feet the width of the river 2 ½ miles [1].

The initial designs were based on using the be metre gauge(MG) and trial walls were made in 1872. Construction commenced in 1873 but in 1874 it was decided to change the entire IVSR line to 5-foot 6inches broad gauge(BG). After a small hiatus to redesign for BG the work continued and 7 more foundations were built. A contract for the Girder work had been entered into with two firms in England, who shipped the girders out to India. The violent oscillations from which the River Sutlej at Adamwahan had been comparatively free for two seasons this year the violent floods the main stream moved from the P-Q span to Q-R and scoured along the west bank. The girder work started to arrive from England to Adamwahan in December 1876. Problems with the Flotilla meant that some of the spans were re-routed via Bombay and Calcutta and transferred by rail. By March 13 spans had arrived and put into place. The bridge was completed by March 1878 and tested where there was hardly any movement as a train passed back and forward.

Supplies were carried for the Sutlej Bridge by a metre gauge(MG) and was operated by 3 MG tank locomotives and initially 10 wagons with 150 more wagons manufactured at Adamwahan. A large timber depot with steam swing machinery was also set up at Hamdi. In 1875 this was extended to 63 miles(100km) of MG tramway to the ‘Sutlej Bridge’. The line was now being operated by 5 tank engines with 70 wagons and more added as the 150 became available. When in 1876 the tramway was finished it had carried 50,000 tons of stone for the bridge, 4,600 tons of iron permanent way material, 6,000 tons of sleepers, 15,000 tons of miscellaneous material, and 20,000 tons of ballast. The equipment was dismantled and transferred to construct the IVSR ’ Ghotki Tramway’ [1].

At the Sutlej Bridge (as it was prior to inauguration) a temporary wooden bridge was constructed so that loaded trains could be run out to the works in the river. His bridge was to be taken down each flood season and put back when the work started again. The Punjab Northern Railway supplied steam lifting equipment, but it was worn out and caused much trouble, it had insufficient power to lift the heavy tools to cut through the heavy clay especially the newly designed cutting tool invented on site to do this work. The temporary bridge took 30 days to build at the beginning of the construction year, but on the 12th February 1877 an unexpected flood swept it away in took 10 days to restore it. During the season over200,000 tons of stone were hauled across it [1].

On 7th June 1878 a train of 22 carriages left Lahore at 8.15 p.m. bound for Adamwahan, stopping at Mooltan at 5.30 a.m. after an hour stop it continued to Adamwahan. Here they found the town decorated in celebration and a large banner with Sutlej Bridge flying over the entrance. During the opening speeches the Sir Andrew [1] on behalf of the Viceroy and the Empress stated that that Queen Victoria had given permission for the bridge to be named the ‘Empress Bridge’ A picture in Getty Images shows the bridge on opening day with the remains of the tramway used for the construction.

The opening party consisted of [2]:-

Other engineers were mentioned during the address by Mr Rayne

In 1913 emergency river training works were carried out by the 'Punjab irrigation Department'., Bahawalpur District. A 2ft 6in/762mm narrow gauge(NG) temporary tramway was used to transport stone from a stone store to the river. It is unknown if locomotives were used [3]..

See Indus Valley State Railway for period up to 1887