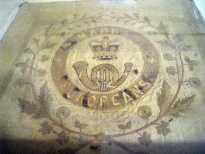 Part of the Madras European Infantry.

Marriages between EIC soldiers and Anglo Indians or Native women, the allowances paid to wives and the army records kept regarding these wives are discussed in "Haemoglobin D (B Punjab) in an East Anglian Family", The Journal of the Royal Anthropological Institute of Great Britain and Ireland, Vol. 95, No. 2 (Jul. - Dec., 1965), pp. 295-306. The article (including an extract) and its implications are the subject of an India List thread.[1]. The 2nd Madras (European) Light Infantry is particularly mentioned as marriage registers were (in 1965) available for the period 1840-1863 showing the race of the bride. The article may be read online on the subscription website JSTOR for free, but first you must register. Some card holders of participating libraries may also have access, refer Miscellaneous tips for more about both options. Also available at the British Library