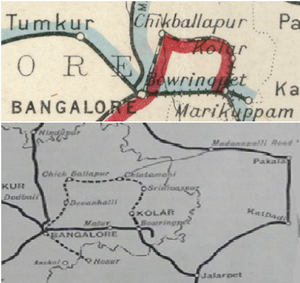 The Chikballapur-Bangalore City Railway, also described as the Bangalore-Chik Ballapur Light Railway, was a 2ft 6in/762mm narrow gauge(NG) railway, operated by the ‘Mysore State Railway’(MSR). This railway was an enterprise by an Indian Company floated for the purpose under a guarantee from the Mysore Durbar . Construction was sanctioned in 1909 but the Company was unable to raise the entire capital and Mysore Durbar became joint owners [1]

The NG railway, 39 miles(62km) from Bangalore City via Yelanka to Chik-Ballapur opened in stages from 1915 from Chik-Ballapur where it connected to the NG ‘Kolar District Railway’ , to Yellanka in 1917 and finally reached Bangalore in 1918[1].

Together these two railways were operated by the ‘Mysore State Railway’ as part of the ‘MSR System’ and provided a NG connection between Bangalore and Bowringpet.

The section near Bangalore to Yelanka , 10 miles(16km), was subsequently dismantled[2] leaving the line with the description Yelahaka-Bangarpet Railway, worked as part of the ‘Mysore State Railway’(MSR).

The date of this part closure has not been determined, it was certainly after 1937 [3] where is was noted that this section had been converted to mixed gauge 2ft 6 in NG and metre gauge(MG) with running rights given to the ‘Madras and Southern Mahratta Railway’(M&SMR). It can be assumed this section, once closed was operating on MG by the M&SMR.