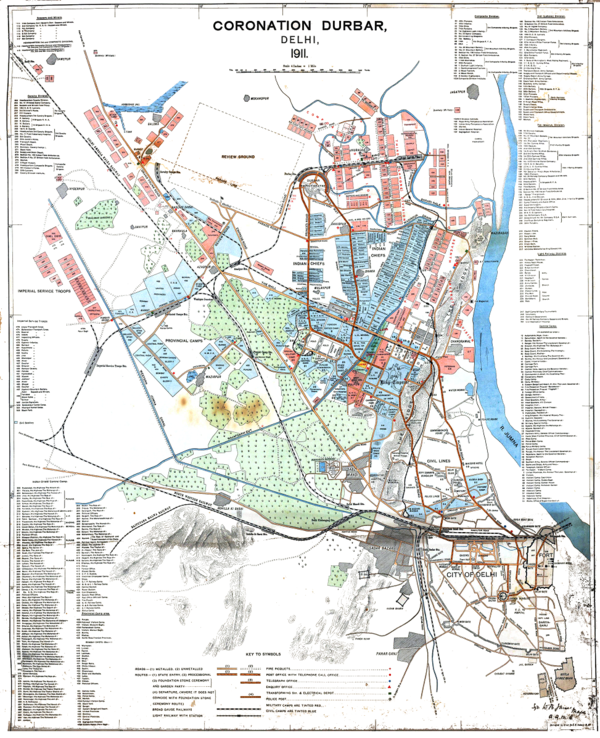 The 1911 Delhi Durbar was announced in March 1911 to commemorate the coronation in Britain a few months earlier of King George V as Emperor of India. The ceremonies lasting from 7 to 16 December, with the Durbar itself on 12 December [1].

A 2ft 6in/762mm narrow gauge(NG) railway system was installed for the transport of troops and visitors to the Durbar, shown --I—I--I-- on map. The terminus of the line was at ‘Tis Hazari Station’ (#220 on map, where there was a turning loop). The mainline was double track and ran 3 miles(5km) north to ‘Khyber Pass’ (#223 Ridge Junction) where one branch ran west to the ‘Polo Ground Station‘(#236 ) and continued north to the ‘Durbar Amphitheatre Station’(#231), at both these terminal stations there was a turning loop. The line only carried passengers and had 15 stations. Normally trains ran every 15 minutes from ‘Tiz Hazari,’ half running to the ‘Polo Ground ‘and the other half to the ‘Durbar Amphitheatre Station’; the trains carried about 230 passengers [2].

The Military loaned from the Light Military Reserve Railway 15 miles of track, 23 locomotives and the rolling stock. In addition to the narrow gauge(NG) railway a number of temporary broad gauge(BG) lines were laid from the Delhi-Umballa-Kalka Railway at Delhi Azadpur to serve the Cavalry and Army Corps and to Kingsway; it is thought these lines were lifted after the Durbar ended [2].

The following is extracted from 'Coronation Durbar Delhi 1911, Official Directory with Maps' [3]:-
In order to provide for the traffic in the Durbar area, special lines, on both the broad gauge and narrow 2ft 6” gauge have been constructed. Visitors are advised to obtain the Delhi Durbar Railway guide for full details. The following short description showing generally the facilities offered, issued by
Chief Engineer: J.C.Lyle, Esq. Traffic: Major H.Freeland, R.E.: -

===Broad Gauge===.
( Fibis comments are shown in italics and brackets)
The ’Delhi-Ambala-Kalka Railway’ (worked by East India Railway at this time) has been doubled from Sabzi-Mandi Station to Wazirpur junction, where a connection is made with the new Durbar lines.
The ‘Southern Punjab Railway’ has been doubled from Brewery Cabin to Shakurpur. From Shakurpur the ‘Durbar Railway’ has been constructed in a north-easterly Direction to Imperial Service Troops Station, Provincial Camps Station and under the ‘Delhi-AmbaIa-Kalka Railway’ to Azadpur Junction; from here the main line on to the terminal station at Kingsway, and two branch lines go in one direction to Cavalry Camps station, in another direction to the Durbar station and Army Camps station.
To relieve congestion in the main stations at Delhi, a second terminal station ‘Hamilton Road ‘ has been made, with a ‘Halt’ station close to the Dufferin Bridge; and a connection between the ‘Agra-Delhi Chord Railway’ at Delhi Sadar, and the main lines at Grand Trunk junction, which will divert traffic round the Main Station.
Local trains will run at intervals of about 15 minutes between Delhi Main, or Hamilton Road, and Kingsway halting at Delhi Kishengaaj, Imperial Service, Provincial Camps and Azadpur en route. Passengers for Cavalry Camps, Durbar, or Army Camp stations change at Azadpur.
An occasional train will run via Sabzi- Mundi and Punjab Camps stations. These broad gauge trains carry about 1,100 persons and carry goods and passenger traffic of all description, but It is important that for all traffic booked through to the five broad gauge camp stations, viz: Kingsway, Army Camp, Cavalry Camp, Provincial Camp and Imperial Service Troops Stations goods should be clearly marked with the special labels provided free of charge at all the chief stations in India. The labels are of distinctive and designs. Special trains and fully reserved carriages will be sent through to any of these camp stations. The information references to other railways for special trains, and for and parcels, will be found in the Delhi Durbar Railway guide, or can be ascertained at the stations.
There are also representatives of the railway companies at the enquiry offices of important camps. 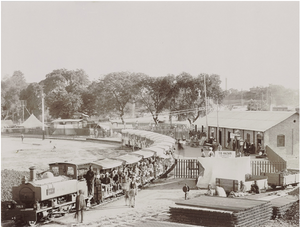 ( Fibis comments are shown in italcs and brackets)
The terminus is at Tis Hazari, with a short single line to the Mori Gate (Mori Gate is shown 400 yard/365 mtr east of Tis Hazari but no railway is shown on the map). The main line is double and runs North to the Khyber Pass, where one line West to the Polo ground and one North to the Durbar Amphitheatre. The line carries passengers only. Normally trains run every fifteen minutes from Tis Hazari to the two termini, half to the Polo ground and half to the Durbar station. The trains carry about 280 persons each. The fares are as under and apply to journeys between any pair of on the Durbar Railways. Cheaper fares will be offered to those travelling by the light railway in the early morning to provide facilities for the servants of visitors to the central market or the city for provisions.

The ‘British Library Photographic Collection’[4] has a ‘Ewing System Monorail’ locomotive bearing the PSMT logo, this is the ‘Patiala State Monorail Trainways’.
The background to this image shows a very elaborate circular/semi-circular construction. There is a strong possibility that is one of the structures at the 1911 Durbar. But it has not been possible to confirm this assumption .
This photograph can be seen on the Fibis page ‘Patiala State Monorail Trainways’ - PSMT Locomotive No 4 at unconfirmed location’