The Patiala State Monorail Trainways(PSMT) was a unique rail-guided, partially road-borne railways system running in Patiala from 1907 to 1927. The monorail used the Ewing System and was constructed and operated by the Bombay firm of ‘Marsland, Price & Company’ [1]

Maharaja Sir Bhupinder Singh of the Princely Patiala State had this unique railway system constructed to facilitate movement of people and goods in his state. The chief engineer of this project was Colonel C W Bowles who had earlier successfully used a monorail based on Ewing System (designed by William Thorold) during his stint as engineer for the Bengal-Nagpur Railway when responsible for the Construction works at Kharagpur used for transportation of construction materials . Colonel Bowles was made chief Engineer for the PSMT project. One of the objects of PSMT was to make use of the 560 mules being maintained by Patiala State. Apart from mules, bullocks were also used to haul the monorail before introduction of steam locomotives on the route of PSMT [1].

No information or records have been found, except by obscure references:-

The total distance covered by PSMT was 50 miles (80 km). PSMT was run on two unconnected lines. The lines were constructed by the firm of Marsland and Price, based in Bombay.

At Sirhind there was a connection to the North Western Railway ‘Ambala-Ludiana SectionMainline’ and the line was opened as far as Basi, 5 miles(8km) by 1908 [3].

Sirhind to Morinda, a distance of 15 miles (24 km). The Basi Monorail was then extended to reach Morinda. It was proposed to extend this line to Rupar but since Rupar was connected by a railway line, this idea was abandoned.

Patiala to Sunam, a distance of 40 miles(56 km) via Bhawanigarh following the good road on which there was a constant bullock cart traffic in passengers and freight. Most of the traffic transferred to the monorail line, which, although used animal traction, was smoother and more comfortable. The road was mainly on a raised embankment to keep it clear when the surrounding land was flooded. The embankment was about 20ft (6 metres) wide at road level with a 8ft(2.4m) centre strip, leaving soft shoulders on each side of about 6ft(1.8m). The monorail was laid on one of these shoulders so that the balancing wheels ran along the edge of the metalled surface, leaving the rest clear for other traffic [4]. A letter by Colonel Bowles to a Mr. Ambler described the route of Patiala-Sunam line as starting from goods yard of North Western Railway (NWR) at Patiala. The PSMT then crossed the main railway line at a road level crossing nearby. It then went through the walled city towards City and then took a turn north towards the cantonment. Then it travelled along the main road to Bhawanigarh and then Sunam [1].

PSMT Locomotive No 4 at unknown location 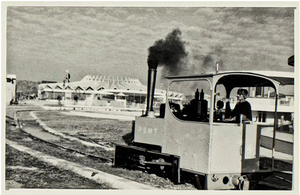 PSMT Locomotive No 4 at unknown location

The ‘British Library Photographic Collection’[5] has a ‘Ewing System Monorail’ locomotive No 4 bearing the PSMT logo.
The background to this image shows a very elaborate circular/semi-circular construction . There is a strong possibility that is one of the structures at the ‘Delhi Durbar’ of 1911

The published information about PSMT is very limited:-

Apart from the above, PSMT has not been mentioned in any official documents of that period in India.

It is generally thought that the PSMT closed when the opening in 1927-28 of the North Western Railway(NWR)'s Sirhind-Rupar Railway line made the Patiala State Monorail Trainways obsolete, together with any plan to extend the line from Morinda to Rupar.

However adverts were placed by the Punjab Public Works Department in the 2 Jul 1921 edition of ‘Indian Engineering’ offering monorail trucks, passenger cars, locomotives etc for sale and in the 25 July 1925 edition it offers the whole of the tramway with the statement ‘although the line is a monorail, the wagons and carriages are suitable for conversion to narrow gauge at not too much extra cost’ [6].

See pages Monorail Systems in India and Ewing System Monorail
Further information and later history of the locomotives is given in Railways and Locomotives of India and South Asia” compiled by Simon Darvill [6].