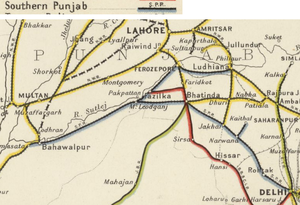 The Southern Punjab Railway(SPR) was a broad gauge(BG) line built to provide a more direct connection from Karachi to Delhi by linking to the original Indus Valley line at Samasata and avoiding the North Western Railway loop via Lahore. [1]

The Southern Punjab Railway(SPR) Company was formed in 1895 with Bradford Leslie as Chairman. Under contract with the Secretary of State for India, Leslie and his partners formed the company to build a BG Railway from Delhi to Samasata about 400 miles to the west.

Horace Bell was the Consulting Engineer for SPR in London for the construction.,

The main line ran north west from Delhi to Bhatinda then south west through Bahawalpur State to Samasata, a total distance of 402 miles(643km). Several extension lines (Jullunder, Sutlej Valley etc.) extended the length to 502 miles(803km) in 1905.

The railway was worked by the North Western State(NWR) Railway (see "Records L/AG/46/34").

Purchased by Government in 1930.

SPR Network of Lines including Lines Managed and Worked

An on-line search of the IOR records relating to this railway [3] gives many references. The most important being:-

also concerning the working of the Southern Punjab Railway by NWR.