Dibru-Sadiya Railway A metre gauge(MG) railway in the extreme north-east corner of India. Owned by ‘Assam Railways and Trading Company’(AR&TC). Opened in stages from 1882 to a total of 86 miles(140km) by 1910. 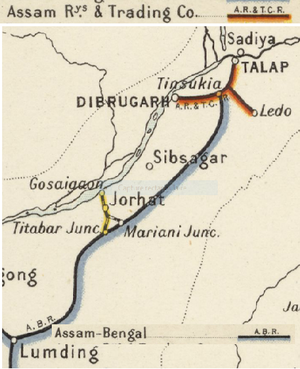 Makum Branch Railway, 23 miles(37km), opened in 1884 as a branch from Makum Junction to Dihing Bridge[1]

In 1903 a connection was created with the opening of the terminus at Tinsukia of the metre gauge(MG) ‘Assam-Bengal Railway Mainline’, thus giving a direct line to Chittagong Port.

Thus giving a total line length of 86 miles(140km) including the ‘Makum Branch’ and the ‘Ledo and Tikak Margherita Colliery Railway’[1] and later classified as the ‘Dibru-Sadiya Railway System’[2].

The following based on the auto-biography of Charles Folliott Birney, Chairman ‘Assam Railways and Trading Company Limited [3].

1881: Robert Piercy and three Italian engineers, the Chevalier brothers , arrived in Calcutta and made their way to Dibrugarh . Benjamin Piercy, who as consulting engineer, remained in England and advised that:-
“In fixing the line between the River Dehing and the coal measures will be the simplest and least costly , and to bear in mind the petroleum concession is likely to pass into the hands of our Company. Robert Piercy will make Dibrugarh his headquarters and direct operations at that end. Mr Roberto Paganini will establish quarters for himself and assistants in the forests on the banks of the Dehing and direct operations at Makum or Naga.”
Several weeks were spent in surveying the line from the Steamer Ghat to the town of Dibrugarh. Possession had to be obtained of the required land and a labour force had to be enlisted.

1882: As a result it was not possible to begin construction until January 1882, when a considerable period of the working season had expired. Soon however the first consignment of rails, locomotives, etc shipped from the United Kingdom arrived at Dibrugarh. They had been brought a thousand miles up the Brahmaputra River from Calcutta by the ‘Rivers Steam Navigation Company’. With sleepers cut locally the first few miles of track were promptly laid.
On 1 May 1882, the first metre-gauge locomotive in Assam passed over that section of line from the Steamer Ghat to the Jaipur Road.
The terminus on the Brahmaputra, known as Mohona Mukh, the Steamer Ghat during the dry season, was some five miles from Dibrugarh. The site for the crossing of the Dehing River was half-way between Kujugaon and Makum Fort. In 1882 Roberto Paganini established his quarters at Kujugaon to supervise the construction of the line on the north bank towards Dibrugarh, the south bank towards the coalfield, and the bridge, but also the preliminary work at the coalfield itself. By 1882 the Company had purchased a number of steamers and barges and being used to ship material up the Dehing River.
The main trouble, both at Dehing and Brahmatputra ends of the line was the lack of platelayers experienced and competent enough to adjust the rails and lay points and crossings accurately. To overcome this difficulty platelayers were sent out from England. Another essential requirement was the supply of sleepers and daily about 1000 were being produced.
On 15 Aug 1882 the line was opened for goods traffic up to the Dinjan River and to Chabua on 23 December .

1883: The line to Makum Junction, forty miles from the Steamer Ghat at Dibrugarh was opened for passenger traffic on 16 Jul 1883. On 25 Dec the lines from the Brahmaputra and the Dehing were linked at Borbhil, in the heart of the forest, completing through railway communication.

1884: The official opening of the Ledo Coalfield was 18 Feb 1884, although the Dehing Bridge was still of timber construction and not ready for locomotives, so carriages were hand shunted one-by-one across the bridge to the Margherita side of the river.
The line from Makum Junction along the Sadiya Road to Talap, as far as the Doom Dooma Bridge was opened to traffic on 2 May 1884 and to Talap on 5 Feb 1885

1897: The Directors of the ‘Assam Railways and Trading Company Limited ’ invested in the ‘Brahmaputra Sultanpur Railway Co Ltd’ - see separate page to construct a metre-gauge line from Sultanpur on the ‘Eastern Bengal Railway’(EBR) eastward through Bogra to Kaligani on the Brahmaputra River to open up a large market for the Company’s coal and oil products.

1898: The first bridge over the Dehing River, of wooden construction, was severly damaged in August. Reported by the Agent and General Manager Sydney S Hawkins with six spans (300-feet) being carried away. Temporary wooden trestles were made and the line opened again within a month, in spite of two floods that undid much that had been done.

1899: A steel bridge which had been under construction since 1896 was opened to traffic. In May.

1910: The ‘Saikhoa Extension Railway’ from Talap to the Brahmaputra at Saikhoa Ghat was built in 1909-10 at the Government’s request.

1911: New workshops were being constructed at Dibrugarh to replace the old workshops by then nearly 30 years old. The main reason for the change, however, was that the old workshops were cramped for space and inconveniently situated at a point where the river was eroding its bank. The workshops, still in use in 1946 included the Erecting Shop, Boiler Shop and Smithy, Foundry, Machine Shop and Carriage and Wagon Shop.

1914-18:The old 250-feet timber bridge at Doom Doom was replaced during WW1 by the present steel bridge, which was formally opened by the AR&TC Chairman Lord Ribblesdale in 1920.

An on-line search of the India Office Records (IOR) records held at the British Library relating to this railway [4] gives the following:-