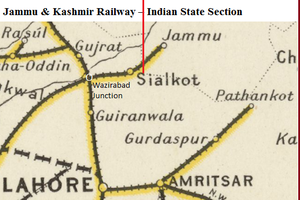 The Jammu and Kashmir Railway was a short broad gauge(BG) branch comprising two sections totalling 25 mile(40km) line opened in 1890 completing the linking of Sialkot to Jammu and was worked by North Western Railway(NWR). The 25 mile(40km) section is, in some records, referred to as the Jammu-Sialkot Railway and Sialkot-Jammu Railway

From the Frontier the further 16 miles(26km) to the ‘Left Bank of the Tawi River near Jammu’, financed by the Princely Kashmir State Durbar. And is described as the ‘Jammu and Kashmir Railway (Native State Section)’ [2]..

The complete line from Wazirabad to Jammu, a total of 51 miles(82km) was part of the NWR network until partition when the line was severed. The section within Kasmir State becoming the Suchetgarh-Jammu Railway .

The following has been extracted from the British Library India Office Records R/2/1061/S” Railway from Sialkot to Jammu”, 1888 [3]

Early in 1888 the Discussions were coming to a close on the final agreement regarding the railway that would run from Sialkot in the Punjab to Jammu in Kashmir a distance of 25½ miles. The Durbar of Kashmir was to finance the railway with the British Government supplying interest on the sum paid for the 9 miles in British Territory. The line was across fairly flat open with only some hills near to Jammu. The crossing of the Balal Nulla was the only bridge spanned by a two girder bridges where it crosses the low land the line was to be allowed to flood during the high rains. The bridge was to be made with girders from a bridge over the Chenal, other used materials that possibly could be used were second hand rails from North-Western Railways but only in the Indian Section. The Stations were to be at Sialkot, Salia, Suchet Garh, Rungbir Singpur, a crossing, Miran Sahib a flag station, Satwari, then finaly at the Tawi or in Jammu, the Terminal. The original cost was to be Rs63,000 per mile although a consultant engineer later in the year expected the cost to be nearer Rs65.000 per mile. The agreement was finally signed on 4th July 1888. The North-Western Railway were to be the operators and required the construction to be to the standard that was operated by the Indian State Railways. The railway terminal was to terminate at the Tawi and it would be allowed to be temporary terminal until the railway was completed in to the town at a later date. The initial operation contract was for 5 years. In January 1888 Mr F. Wolley-Dod had been appointed as Executive Engineer under General R De Bourbel R. E., the Chief Engineer of the State of Kashmir. To complete the quotation and to start the laying out of the railway. Mr Wolley-Dod reported that by the end April 1888 the line had been set as far Runbhir Singpur where the station had been fixed, and one lakh of bricks had been ordered for the construction of buildings and bridges.