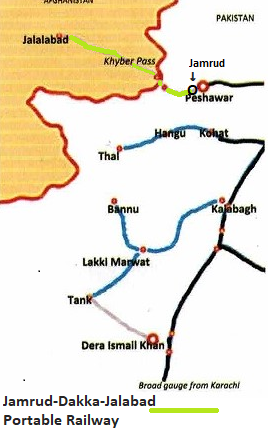 A railway from India to Afghanistan via Khyber Pass had first been surveyed 1879; finally construction started in 1905 from a place called Kacha Garhi between Peshawar and Jamrud. The track made progress westwards and 32km of track was laid by 1907, this was uplifted in 1909. See 'Khyber Railway' (separate page for more information)

As a consequence of the 3rd Afghan War in May 1919 an urgent 'Light Portable Railway' (see separate page for more information) was proposed from Jamrud in India through the Khyber Pass to Dakka, on the Afghanistan border, with an extension to Jalalabad if required. 'A large amount of 'War Department Light Railway' 60cm (600mm) narrow gauge(NG) rolling stock was despatched immediately with the rails to be obtained in India. Even though the 3rd Afghan War ended in Aug 1919, it is thought that the line from Jamrud to Dakka was laid, but documents to definitely corroborate this have not been found [1].

No further information has been found.

See 'Khyber Railway' (separate page for more information). This railway from Jamrud to the summit of the pass at Landi Kotal was opened in Nov 1925 using the broad gauge(BG) as an extension to the North Western Railway(NWR) network

The "Imperial Gazetteer of India" describes the road route as it existed in 1908:-

The Khyber Pass is the great northern route from Afghanistan into India ... the pass begins near Jamrud, 10½ miles(17km) west of Peshawar, and twists through the hills for about 33 miles(53km) in a north-westerly direction till it debouches at Dakka. The most important points en route are Ali Masjid, a village and fort 10¼ miles(16.4km) from Jamrud, Landi Kotal, the summit of the pass, 10 miles(16km) farther; and Tor Kham, at which point the pass enters Afghan territory, about 6 miles(10km) beyond Landi Kotal [2]

By interpretation of the above, which now forms the National Highway N5, Jamrud to Torkham (was Tor Kham) Border Crossing is 38.5km; Torkham Border Crossing toJalalabad is 74km. Dakka (not shown on map) would be about 20km on this route from Torkham.