The Khyber Pass Railway was a line from India to Afghanistan via Khyber Pass; built as a strategic line to thwart any Afghan or Russian invasion of India and opened in 1925. [1]

Described in some records as the Peshawar-Landi Kotal Railway 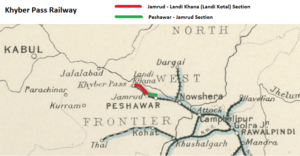 Landi Kotal was a station, 5 miles(8km) from the Afghan border, and after 1932 became the terminus of the Khyber Pass Railway [3].

1879: a reconnaissance survey was conducted with an aim to find the feasibility of laying railways through Khyber Pass. Many years passed without any action on the ground [4] [5].

1897-98: a survey was carried out for a narrow gauge (NG) fof 33 miles(53km) line from Peshawar to Landi Kotal. It was reported to meet “the heavy demands for transport during military operations on the frontier, the question of laying down light railways has been under consideration”.[6].
The survey and report also examined an additional route from Nowshera to Durgai.
See page ‘Nowshera-Durgai Railway’ for more information.

1901: opening of the railway between Peshawar and Jamrud as broad gauge(BG) . Described as the ‘Pershawar-Jamrud Branch’ of the NWR ‘Frontier – Military Section’, a length of 11 miles, opened 1 Jan 1901 [7].

1905-07: finally the construction started from a place called Kacha Garhi between Peshawar and Jamrud. The NG railway made progress westwards and 20 miles(32km) of track was laid by 1907 [4][5].
See page ‘Jamrud-Dakka-Jalabad Portable Railway’ for more information.

1907: The terms of the Anglo-Russian Convention was that Russia accepted that Afghanistan was outside its sphere of influence [8]. This made British consider Russia no longer a threat and the work on Khyber Pass Railway was stopped.

1909: several kilometers of permanent way and bridges were uprooted from Khyber Pass and sent to other areas of India to be used there[4][5].

1919-25: A ropeway for carrying of military supplies, with a length of 19 miles(31km), was constructed from Landi Kotal
See page ‘Khyber Ropeway Company’ for more information.

1920-25: Colonel Gordon Hearn was assigned to the work of surveying and recommending the best route through Khyber Pass. Previously all surveys recommended a metre gauge(MG) track. However the proposal to use broad gauge(BG) was adopted and construction restarted in 1920. Victor Bayley was the engineer who was assigned the construction of the line. The section from Jamrud to Landi Kotal was opened on November 3, 1925 by the wife of the engineer Victor Bayley. [9]

The railway was worked by North Western Railway(NWR) until partition in 1947. Then by Pakistan Railways until closure. [10]

An on-line search of the India Office Records (IOR) records held at the British Library relating to this railway [11] gives several entries, the most relevant as follows: -