This page requires editing to become a quality FIBIwiki Page. You can help out by editing the page . 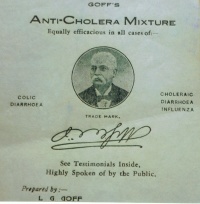 Medals of the British army, and how they were won By Thomas Carter Published by Groombridge, 1861, states:

The following information, collected from various sources, some of which give conflicting personal details, include his citation in The London Gazette (issue 22538 dated 13 Aug 1861, published 13 Aug 1861) for the action in the 2nd China War of 1860. He was in the Bengal SMD.

No. 2. General Orders by the Governor-General of India in Council (Fort William December 5, 1857) (No 1,543.) (report commences page 119, mention page 123) THE Governor-General in Council has received from Brigadier Inglis, of Her Majesty s 32nd Regiment, lately commanding the garrison in Lucknow, the subjoined report of the defence of the Residency in that city, from the first- threatened attack upon it on the 29th of June to the arrival of the force under Major-General Sir J. Outram GCB, and the lamented Major-General Sir H. Havelock KCB on the 25th of September.

"The medical officers of the garrison are well entitled to the cordial thanks of the Government of India. The attention, skill, and energy, evinced by...., and of Mr. Apothecary Thompson, are spoken of in high terms by Brigadier Inglis."

"I beg particularly to call the attention of the Government, of India to the untiring industry, the extreme devotion, and the great skill which have been evinced by Surgeons ....and by Mr. Apothecary Thompson—in the discharge of their onerous and most important duties."

Names from other sources