The Dholpur-Bari Light Railway (DBLR) was first described in the Imperial Gazetteer of India, 1908 as the Bari-Dholpur Tramway a ‘light steam tramway’ under construction to carry red sandstone from Bari to Dholpur to connect with the Indian Midland section of the Great Indian Peninsula Railway (GIPR) [1] . The line was 19.6 miles(31km) in length and opened in Feb 1908 [2]. 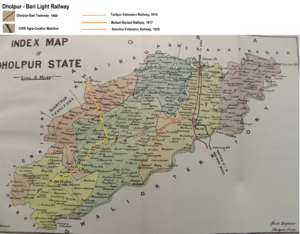 Dholpur-Bari Light Railway. Map from British Library IOR/V/10/1102 “Annual Administration Report of Dholpur State for Year ending 30 Sept 1910”. Photographed with permission from the 'Railway Section' of the above report.
The map shows the GIPR Agra - Gwalior mainline as it passes through Dholpur State and the Dholpur-Bari Light Railway and marked up to show later extensions.

The DBLR was a 2ft 6in/762mm narrow gauge(NG) line owned and managed by the Princely Dholpur State Durbar. The line ran from an interchange at Dholpur on the Great Indian Peninsula Railway(GIPR) mainline to Bari, a length of 19 miles(31km) and opened in Feb 1908 [3].

The quarry at Narpura, 4 miles north-west of Dholpur, was connected to the DBLR by a railway siding and was the source of red sandstone used for building purposes. It is fine grained, easily worked, hardens by exposure and does not deteriorate by lamination [4]. This quarry siding does not appear in the 1937 Report [2] .

The Mohari-Barauli Railway was a NG line, with a length of 15 miles(24km) that opened in Feb 1917. The line was constructed by the Imperial Delhi Committee for the carriage of stone for Delhi (later to be named New Delhi) from quarries at Barauli and was managed, maintained and worked by the Dholpur State Durbar in conjunction with the DBLR [3].
From Barauli the line ran to Mohari Junction, 5 miles(8km) north-west of Bari, where it joined the narrow gauge NG DBLR line to Dholpur . At Dholpur there was an interchange to the GIPR broad gauge BG line to Agra and onward to Delhi.
See also Delhi Imperial Construction Railways for further information

The Simuttra Extension Railway line was a NG line, extended from Barauli a further 3½ miles(6km) westward to reach Sirmuttra(Sir Muttra) in 1929 [5][2]

The Dholpur-Rajakhera Line, 22 miles(35km) from Dholpur in a north-easterly direction , had been sanction in 1918, but the 1937 Report shows this outstanding[2]. This line does not appear on modern maps – presumably not constructed.

In 1950, the DBLR was nationalised and in 1951 merged with others to form Central Railway, a zone of Indian Railways.