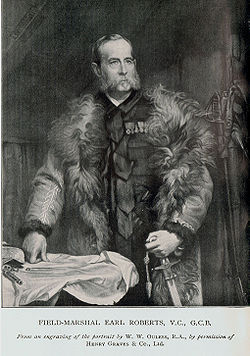 Field Marshal Frederick Sleigh Roberts, 1st Earl Roberts, Bt, VC, KG, KP, GCB, OM, GCSI, GCIE, PC (1832-1914) was a British soldier born in India who joined the Indian Army as a Second Lieutenant in the Bengal Artillery in 1851. He served in the Indian Mutiny during which he won a VC at the Battle of Kallah Nuddee. He transferred to the British Army and took part in the Ambela Campaign, the Abyssinian Campaign and the Lushai Expedition. He was given command of the Kurram Valley Field Force in the 2nd Afghan War and later undertook the renowned March from Kabul to Kandahar. He became Commander-in-Chief of the Madras Army and subsequently Commander-in-Chief in India. He was in direct command during the 3rd Burma War. In 1892 he was created Baron Roberts of Kandahar and Waterford and he left India the following year.