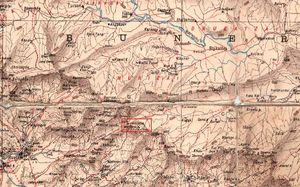 Following their defeat at the Battle of Sittana in 1858 the Hindustani Fanatics built up a new settlement at Malka and began raiding settlements in British territory. The Governor of the Punjab sent an expedition under Brigadier Neville Bowles Chamberlain. The fanatics persuaded the Bunerwal tribesmen that their land would be taken over. The Akhund of Swat also lent support. Due to this, British met strong opposition at the Ambela Pass and were held up for four weeks. After Chamberlain was wounded, he was replaced by Major General John Garvock who broke out of the pass and eventually obtained the submission of the Bunerwals. The British burned Malka but suffered nearly 1,000 casualties.