To avoid confusion Fibis have adopted the following titles:- 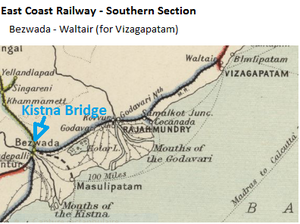 The bridge was designed by Sir Alexander Rendel and F J E Spring as Engineer-in-Chief, and Ernest Ifill Shadbolt as Executive Engineer on construction. . The truss spans are built of plate girders and were fabricated in Britain, half by P & W MacLellan and half by Head Wrightson Co. [2]

The ‘Kistna Bridge” comprised twelve 300 foot(9.1mtr) spans and was constructed with as a broad gauge(BG) line. At some time an additional rail was added to allow metre gauge(MG) traffic to use the bridge [3]. This would be to accommodate the ‘Bellary-Kistna State Railway’ metre gauge(MG) line.

In 1901 the southern section of the ‘East Coast State Railway’ - which included the ‘Kistna Bridge’ - was transferred to the ‘Madras Railway’(MR) in 1901; subsequently renamed ‘Madras (North-East) Railway’; becoming the Madras-Waltair NE Mainline of the ‘Madras and Southern Mahratta Railway’(M&SMR) in 1908.