The Kotri-Rohri Railway linking Kotri to Rohri in Sind Province (now in Pakistan) was a key part of the Lahore-Karachi Mainline and was faced with crossing the river Indus .
Two routes were developed :- 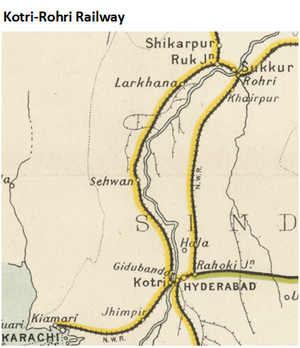 The initial route crossed the River Indus at Sukkur.
The Indus Valley State Railway had reached Sukkur in 1878 and the steam ferry that transported eight wagons at a time across the Indus between Rohri and Sukkur was found to be cumbersome and time-consuming. The opening of the Lansdowne Bridge in 1889 solved this bottleneck and thus the port of Karachi was connected to the railway network
In 1886 the North Western Railway (NWR) was formed by amalgamatyion of several railways
With the completion of the bridge in 1889 the NWR ‘Ghaziabad-Karachi Mainline’ provided the through connection under one operator.
The line from Sukkur to Kotri was frequently breached, which caused vexatious interruptions of communication with Karachi and the North West Frontier and dislocated the export trade. On these grounds it was decided to have alternative line on the left bank of the troublesome river.
This line became known as the Rohri-Kotri (via Ruk) Branch Line,on the opening of the new connection in May 1900, described below.

An alternative route was developed to avoid the above mentioned problems.
In Dec 1893 the line opened from Hyderabad the line eastward via Rahoki Junction to Rohri, a distance of 178½ miles(285km).
This line became known as the Lahore-Karachi Mainline – ‘Rohri-Kotri Section’ on the opening May 1900 of the Kotri Bridge .