The Delhi Railway was a broad gauge(BG) railway from Amritsar to Ghaziabad and onward to Delhi.
In June 1863 a contract [1] was issued to the ‘Scinde Railway Company’ under which the ‘Delhi Railway’ from Amritsar(Umritsar) to Delhi would be built [2]. The finance was raised in Jun 1863 and the line opened in stages from 1867 and finally completed in Oct 1870 linking to the East Indian Railway(EIR) at Ghaziabad 305 miles(490km).
The 'Delhi Railway', shown in Blue on the map, was one of the railways of the Scinde Railway Company - see separate page for further information on the formation and development of the Company 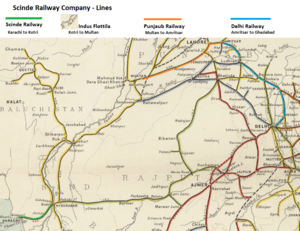 The Scinde Railway Company was first established by deed of settlement in March 1855 and incorporated by the ‘Scinde Railway Act’ of Parliament in July 1855 after which a contract was entered with the East India Company in December 1855 for the construction of the ‘Scinde Railway’ for a line from Karachi to Kotri. This was followed by further developments which included the establishment of the ’Indus Flotilla’ steamers to connect Kotri to Multan and the construction of the ‘Punjaub Railway’ to run from Multan to Lahore and Amritsar and onward to connect to Delhi, this to become the ‘Delhi Railway’

The ‘Delhi Railway’ was to run from Amritsar to Ghaziabad, where it would link to the East Indian Railway(EIR) for a further 13 miles(21km) into Delhi on the EIR line operated under a ‘running agreement’ [3].

The construction of the ‘Delhi Railway’ was undertaken by Brassey & Co in partnership with Mr Wythes and Mr C.Henfrey. Mr G.P.Bidder was the consulting engineer in England and Mr Joseph Harrison the chief engineer resident in India [4] [5]

‘The firm undertook the construction of the line including all the works, and providing permanent way, station materials and partially rolling stock, at a fixed rate of £14,3630 per mile. The works included some very long viaducts over the rivers Jumma, Sutlej and Beeas, besides many minor structures over rivers which would have been thought important on any other railway’. All the ironwork and machinery were imported from England, and had to be carried upwards of 1,000 miules from the ports were they were landed. Including rolling stock, these materials weighed nearly 100,000 tons [5].

The contract gave a completion date of 3 May 1870. Construction commenced early 1865 and sections of the line were opened before this date.

Sutlej Viaduct - The whole railway was completed within the contract time with the exception of 7 miles(11km) across the Sutlej Valley. It had been found necessary in 1869 to lengthen the’ Sutlej Viaduct’ from ¾mile(1.2km) to 1¼ miles(2km), this section was completed and the entire line completed in Oct 1870 [5].

The eastern half of the line from Ambala(Umballa] to Ghaziabad (Ghazeeabad) was opened on 14 Nov 1868 by Viceroy Sir John Lawrence. The opening ceremony is colourfully described in a Report of the proceedings [7].

No Delhi Railway staff records are held in the India Office Records at the British Library, the names of staff transferred to the successor company may appear in Scinde, Punjaub and Delhi Railway and then the North Western Railway records.

The Report of the proceedings on the opening of the Meerut to Ambala(Umballa) section lists the following Railway Company and Contractor’s staff [8]:-

An on-line search of the IOR records using search ‘Delhi Railway’ [11] gives many references. The most relevant being:-

See Scinde, Punjaub and Delhi Railway for period 1870 to 1886 and North Western Railway from 1886 onward when this railway became part of the ‘NWR Commercial Section Main Line’