Khojak Tunnel was a railway tunnel in the Khojak Pass, which was situated on the railway line between Quetta and Chaman in Quetta-Pishin District, Baluchistan. Lying 1,945 metres above sea level, it was completed in 1891. 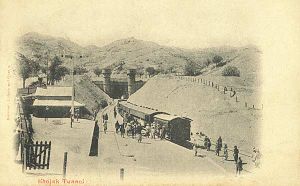 The tunnel was constructed by the ‘Sind-Pishin State Railway’(SPSR).
The ‘Quetta Link Railway’ was ordered by the British Government in 1876 as a strategic railway. The section from Ruk Junction to Sibi opened 1880, constructed by the SPSR which merged into NWR 1886; extended from Sibi via Quetta , Mushkaf and Bostan 1887. The 'Mushkaf-Bolan Section' through the Bolan Pass was a major challenge as described in the page ‘Bolan Pass Railway Construction’, the track was twice washed away and finally opened after reconstruction in 1887. The line reached Killa Abdulla, 1888;. The further section reached Chaman 1892, this required the temporary use of the ‘Khojak Rope Inclines’ from 1888 until the opening of the ‘Khojak Tunnel’ in 1892, these again were major challenges described on separate pages.

- see separate page
Prior to the opening in 1891 of the Kojak Tunnel a temporary system of ropeways were constructed over the Kwara Amran range of mountains on the Afghan frontier of India. The object was twofold[1]:-

The work on Khojak Tunnel began on April 14, 1888 and the first steam engine rolled through the completed tunnel on September 5, 1891. The details of the construction with photographs are given in detail in the ‘Indian Railways Fan Club’ Article [2].