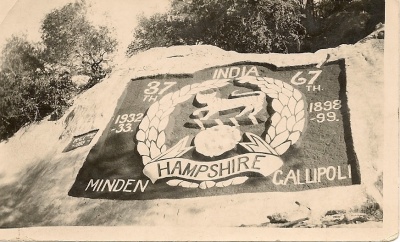 Badge of the Hampshire Regiment carved in Rock. Almost certainly at Cherat, which had a tradition of regimental carvings on the rocky faces of the hillsides. The 1st Battalion, Hampshire Regiment was based at Cherat c 28.4.32 to 13.10.32 and 6.5.33 to 13.10.33 (dates from School Garrison book of Agnes Oliver)

Cherat was a hill station in the Nowshera Tehsil of Peshawar District, North West Frontier Province. It was used by the British as a sanitarium and cantonment from 1861.[1]

"A road on the left takes one to Cherat, another cantonment and a former hill sanitarium which lies few miles South from Nowshera and Mardan on the other side of the Grand Trunk Road. It was discovered by Major Coke whilst exploring the area in 1853. It is 4,500 feet above sea-level and was first used as sanitarium for British troops in 1861 and was declared a cantonment in 1886. There are many surviving British-era military installations, hospitals, cemeteries and a church here. A cliff side near the old parade ground has many regimental crests carved on the rocks. Presently, Cherat is the base of the commandos or the elite SSG and serves both as their headquarters and training school. It has a small military museum. The lofty location commands spectacular views of the Peshawar Valley on one side, and on the other of a portion of the Khwara Valley in Peshawar District, and of Kohat District as far as the Indus River".

There are some references to Cherat being located near Murree , or in the Murree Hills, but these references are incorrect.

Cherat is currently under the control of the Pakistan Army and therefore, off limits to the public.[1]