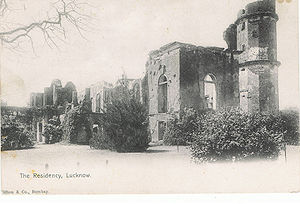 This article is part of the events in the Indian Mutiny

Forces led by Sir Henry Havelock (see Havelock's Campaign and Sir James Outram reached Lucknow in September (the First Lucknow Relief). After taking the Alambagh, this became the headquarters for subsequent actions at Lucknow. Under heavy assault from the rebels, they were unable to evacuate the Residency as intended and instead bolstered the garrison there, a second siege ensuing for six weeks. The Second Lucknow Relief came in November when Sir Colin Campbell reached Lucknow. On the 16th November, 2000 rebel sepoys besieged at the Secundrabagh villa were massacred when the 93rd Highlanders and the 4th Punjabi Infantry took the estate. Campbell managed to evacuate the besieged Europeans at the Residency, but Havelock died before he was able to leave the city. Outram stayed and defended Lucknow until the following March, when Campbell retook the city. During this action Major Hodson (Commander of Hodson's Horse) was killed and buried in the grounds of La Martiniere College.

For details of actions during this period see the following articles

He arrived in India 1856. Appointed to Lucknow. Wounded and died during the Siege of Lucknow July 1857.

The Chronicle Of Private Henry Metcalfe H M 32nd Regiment of Foot, together with Lieutenant John Edmondstone’s Letter to his Mother of 4 January 1858 collected and edited by Lieut.-General Sir Francis Tuker 1953 Archive.org.