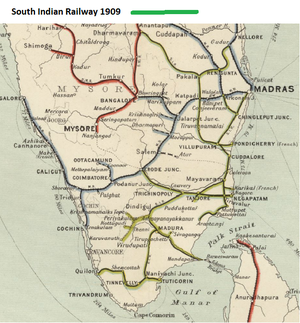 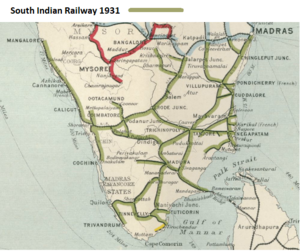 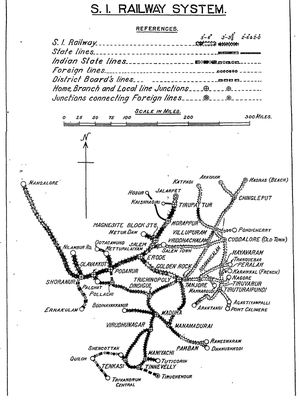 The South Indian Railway (SIR) was the new name applied in 1874 to the merged undertakings of the Carnatic Railway and the Great Southern of India Railway (GCSR)and initially administered from Negapatam; and after 1865 from the ‘General Office Building’ at Trichinopoly [1].

On 1st July 1874 the Great Southern of India Railway Company (GSIR) and the Carnatic Railway, were amalgamated under the title of the South Indian Railway.

From 1875 the originally constructed BG lines were converted to MG in order to have a seamless flow of traffic , since all the other lines around Trichinopoly were MG. The Negapatam to Trichinopoly section converted in 1875 and to Erode by the end of 1879 [3].

The construction of the Pondicherry Railway in French territory by the SIR commenced in 1878 simultaneously with a SIR branch, so when opened in 1879 connected Pondicherry to the SIR mainline at Villupuram. The line was maintained and worked by the SIR under the management of the SIR Agent which had remained at the original Negapatam. The joint Agent finally moved to Trichinopoly in 1880 [4].

Ownership of the SIR and other lines passed to the Government of India(GoI) on 31 December 1890 and a new company, ‘ The South Indian Railway Company Limited’ was formed to work the system so created under contract; this contract was extended in 1909. [5]

The year previously (1 Jan 1908), the Jalarpet to Mangalore broad gauge section had been transferred to the SIR from the Madras Railway. In turn, the Metre gauge Katpadi section was relinquished and became part of the newly formed Madras and Southern Mahratta Railway.

In 1951, the SIR became a constituent part of Southern Railway, a zone of Indian Railways.

Initially two hospitals operated at Negapatam and Trichinopoly and in the early 1900's Dispensaries set up in several locations. In 1928 a full Railway Hospital was established at Golden Rock, Trichinopoly [9].

An on-line search of the IOR records relating to this railway [10] gives many references. The most important being:-

India Office Records. The following are held in the IOR at the British Library:

The above is indexed in: