The Assam-Bengal Railway (ABR) was a metre gauge(MG) railway built to connect the highlands of Assam with the port of Chittagong. [1] 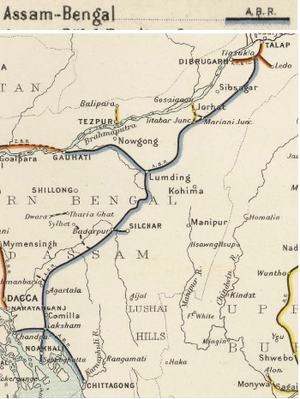 The Government of India(GoI) carried out surveys for the route between 1882 and 1887; one of these being the Chittagong, Chandpur and Comilla Railway Survey. The GoI started the construction of the railway in 1891 from Gauhati to Dimapur. In 1892 the ‘Assam and Bengal Railway Co’ was formed in London to construct and operate the railway. The line was 740 miles long and the construction was divided into three sections numbered I, II and III.

Section II was a more complex section of the line to construct and was not completed until the end of 1903. Work commenced in 1895 and a contract was given to ‘Lewis Jones & Co’ for the construction of the earthworks and tunnels [2].
The Imperial Gazetteer [3] gives the following account:- “This section runs through shale of the worst description, often intermixed with bands of kaolinite, which swells when exposed and causes heavy slips, or exerts immense pressure on the sides of tunnels. To counteract this pressure, very heavy masonry was required, cuttings had to be arched in, and special measures taken to allow drainage to escape. Though the hill section was only 113 miles in length, it container 24 tunnels, 7 covered ways, and 74 major bridges, the longest being 650 feet, and the highest 113 feet above the river bed; while many of the banks and cuttings approach 100 feet in height and depth respectively. Apart from the special engineering difficulties, great inconvenience was experienced owing to the absence of local labour and food-supplies, and to the unhealthiness of the country traversed. At one time, in addition to the railway materials, food for more than 25,000 men had to be carried into the hills on elephants, bullocks, ponies and other pack animals. The result is that the cost of construction of the hill section has been extremely heavy.”
By the end of Apr 1901 track had been laid 36 miles(58km) north from Badarpur and 40 miles(64km) south from Lumding. Track was laid throughout Section III ib May 1903 when goods trains started running. The line opened to passenger traffic on 16 Feb 1904 [2].

Development of the ABR

Main Line from Chittagong Port to Tinsukia, 574 miles(924km) where it joined the Dibru-Sadiya Railway, fully opened 1903. Some records refer to this as the 'Assam Valley Branch Railway'

The end of ABR

An on-line search of the IOR records relating to this railway [5] gives 65 references. The most important being:-

As a state managed railway a search of the following may provide information: -