The ‘East Bengal Railway’(EBR), the terminus of which is at ‘Sealdah Station’, connects Calcutta with the North and East Bengal and Assam and on to Diamond Harbour via the ‘Calcutta and South Eastern Railway’(CSER)

‘East Indian Railway’(EIR) connects Calcutta with Bombay, the United Provinces and the Punjab, and is the outlet for the rich traffic of the Ganges valley. Its ‘Howrah Terminus’ is on the west bank of the Hooghly River. The ‘Jubilee Bridge’ at Naihati, 25 miles up the river, providing access to the Calcutta Docks at Kidderpore running over the ‘East Bengal Railway’ line.

‘Bengal-Nagpur Railway’(BNR) runs through Orissa to Madras and westward through the Central Provinces to Bombay; its terminus is also at Howrah. The ‘Shalimar Branch’ connects to a wagon ferry which operates over the Hooghly River between Shalimar and the Calcutta Docks at Kidderpore 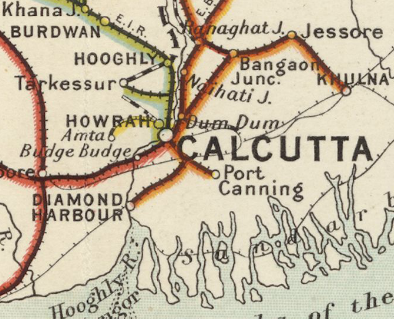 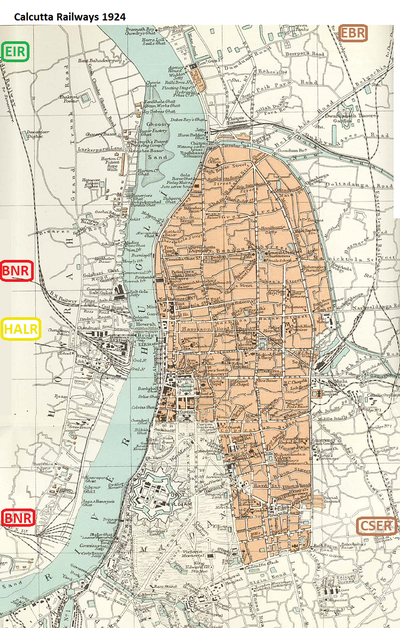 Railways into Howrah connecting to Calcutta

There were three Railways operating into Howrah, connected by bridge across the Hooghly River into Calcutta; from the early 1870’s by the ‘Howrah Floating Bridge’ and finally in 1943 by the ‘Howrah Bridge’ - see separate page

Calcutta City has had a number of Broad Gauge(BG) Stations:-

Beliaghata was the original Terminal of the ‘Calcutta and South Eastern Railway ’(CSER), it was the first station in Calcutta, opened in 1862 and worked by the ‘Eastern Bengal Railway’ as part of the ‘EBR System’ from 1868 . The station later became ‘Sealdah South Station’ [3]. 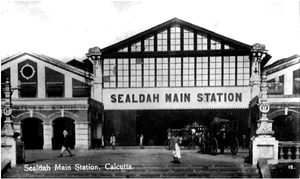 Sealdah, in central Calcutta ,was the ‘Eastern Bengal Railway’ Calcutta terminus station of the ’EBR Eastern Mainline’, Poradaha opened in 1862. At the Calcutta end there was a tin-roofed station room. The proper station building opened in 1869[4].
In 1862, the station was well established with 4 platforms, since then it emerged as one of the most important Railway Stations in Calcutta. Gradually it got more developed and further connected places like Diamond Harbour, Canning, Siliguri, Assam and beyond. The tram terminus was located at Sealdah Station before the year 1978 from where the concept of horse tram carriage started.[5].
Wikipedia records that there are now three stations at Sealdah[4] :-

‘Chitpur Station’, 2½ miles(4km) to the north of Calcutta was a small suburban station on the ‘EBR Eastern Section’. In 2006 became the ‘Kolkata Station’,this railway station was built to offload the passenger traffic of the ‘Sealdah Main Station’[6].

‘Dum Dum Junction Station’ at Dum Dum, 4 miles(6.5km) to the north of Calcutta on the ‘EBR Eastern Section’ was a junction with the ‘EBR Central Section’ [2]

Howrah was the Terminal Station of the ‘East Indian Railway’(EIR) from the start of the service in 1854. In 1900 the ‘Bengal-Nagpur Railway’(BNR) opened the ‘Calcutta Extension Line’ and the new Station was opened in 1905
‘Howrah Railway Station’ - see separate page for further details

The Tram Terminus was located at ‘Sealdah Station’ to Armenian Ghat, via Bowbazar Street, Dalhousie Square and Strand Road. The horse-drawn route opened in 1880. In 1900, the electrification began and the first electric tramcar in Calcutta ran from Esplanade to Kidderpore in 1902 [7]. Trams departed from Sealdah towards Rajabazar, Howrah Station, Calcutta High Court, Dalhousie Square, Park Circus and Dharmatala. Expansion of the system continued by the ‘Calcutta Tramways Company’ - see separate page 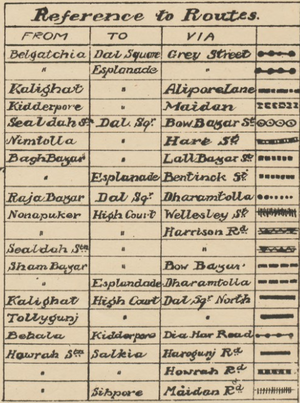