- a sub-section of the East Indian Railway(EIR) page

The EIR also managed, worked and maintained a number of lines on behalf of other parties .
As detailed below in section BG Lines Worked by EIR at some time 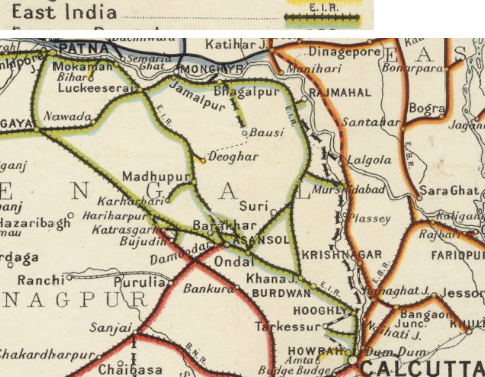 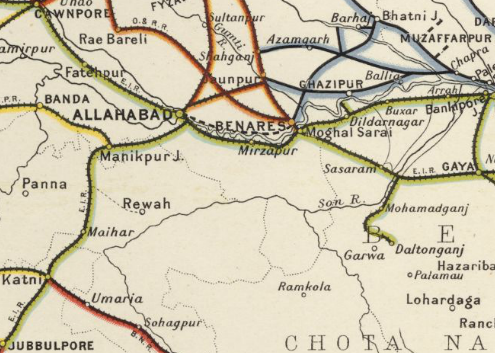 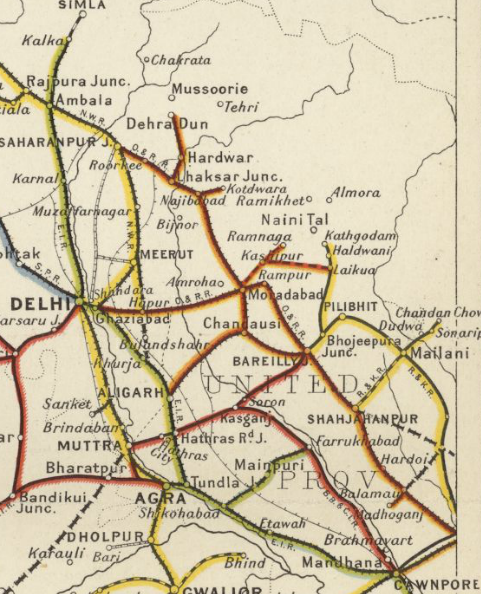 First section Howrah to Hooghly, 24 miles(38km,) opened 1854; via Khana Junction-Bhagalpur-Jamalpur-Luckeesera-Mogul Sarai to Allahabad with the opening of the Jumna Bridge completed 1865; connecting to the Allahabad via Cawnpore and Ghaziabad to Delhi (South Bank, Jumna River) in 1864, and to Delhi Terminus in 1867; 864 miles(1643km). Page 53 (pdf 62)

A branch railway from Bhagalpur to Mandar Hill; under construction 1907 for EIR as a branch of the Sahibganj Loop EIR Line; dismantled in 1917-18 for reasons unknown.

Alphabetical order with page and pdf references from the “1918 Report on Railways” ” [2] and IOR source[3].

BG Lines worked as part of the 'EIR System' 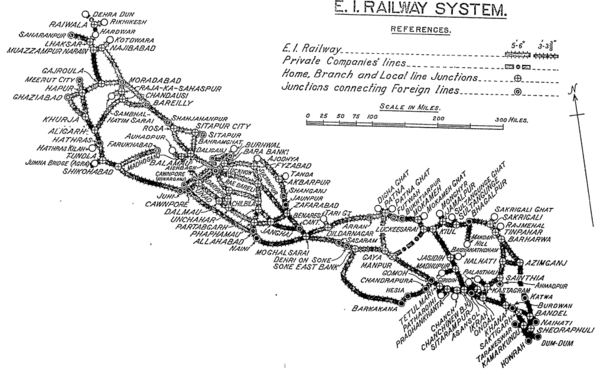 The following are detailed in the 1937 ‘History of Railways’ together with the map shown[1].

Fully opened 1865, 941 miles(1514km) from Howrah to Ghaziabad. The 1918 Report describes as the ‘Howrah-Delhi EIR Main Line‘ see separate page but later the final 12½ miles(20km) from Ghaziabad to Delhi was a North Western Railway Line over which EIR had “running powers”.

Fully opened 1862, 253 miles(407km) from Khana Junction to Kjul. § The 1918 ‘Administration Report’ detailed above described this line as the as the ‘Sahibganj Loop EIR Line’

Branches of the ‘EIR Main Line’

Branches of the ‘EIR Loop Line’

Branches of the ‘EIR Grand Chord’

Former ‘Oudh and Rohilkhand Railway’ (O&RR) Main Line, absorbed into EIR 1925. Total line length 520 miles(837km) opened in stages from 1872 to 1893 with the final section connecting to the EIR at Mogul Sarai in 1902 O&RR -see separate page for all following

BG Lines worked by EIR at some time