The route of what became the PNSR, was first surveyed in 1857 and years of political and military debate followed as described under Lahore & Peshawar Railway .

Finally, following further exchanges, the line was constructed by the of Government of India (GoI). The Punjab Northern State Railway(PNSR) was created in 1870-71 to construct and operate the railway from Lahore to Peshawar. The first section of the line was opened in 1873 and Lahore and Peshawar were connected in 1883 [1] with the completion of the Attock Bridge over the river Indus. It was the first railway in India to have been taken under GOI control in 1886. 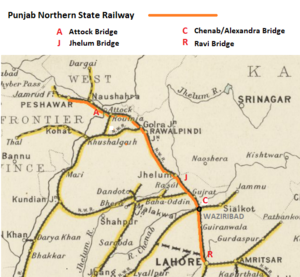 The railway was first designed as a broad gauge(BG) line, but the Government Railway Gauge policy changed and the metre gauge(MG) was adopted for the PNSR see separate page ‘Railway Gauge’ .

The ‘1871-72 Report on Railways’ [2] states:-
“Having been originally designed for the 5' 6"gauge (BG), fresh plans and drawings had to be prepared when it was determined to adopt the new metre gauge of 3' 3 3/8" (MG) This led to the suspension of operations for a time, but during the past year there has been much activity in pushing on the works, and considerable progress has been made. It is estimated approximately that the line will be constructed for 10,000/. a mile. The expenditure had amounted on the 31st December last to 660,868/. The bridges over the Ravee(Ravi), Chenab, and Jhelum rivers are amongst the most formidable works yet undertaken in India, and will not be finished so soon as the rest of the line, but the sections between the rivers may possibly be opened this year.”

Several major bridges required construction to complete the PNSR line between from Lahore and Peshawar (See separate pages for details ):-

Minor Bridges mentioned in the 1876-77 Report [5]:- Chikori Bridge, which had to be rebuilt; Chumb Bridge, 5 openings of 37' 6' girder; Dekh Bridge, 3 openings of 37' 6' girder; Ghilanwala Bridge, 4 openings. The 1877-78 Report refers to the Bagh Butcha Bridge and the Chikori Nullah Bridge with the problems of conversion to the BG specification. The 1878-79 Report details the Jhelum to Rawlpindi Section with bridges over the large rivers Dina, Bukrala, Sohawa, Bishendorh, Bykhan and Sohan.

With others, the Punjab Northern State Railway was merged with the Sind, Punjab and Delhi Railway in 1886 to form the ‘North-Western State Railway’ (later becoming the North Western Railway ).

There are no PNSR Staff agreements held at the British Library in the India Office Records.

The Annual Reports [5] mention the following:-