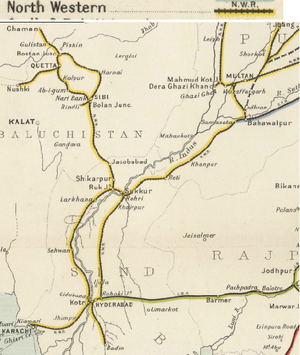 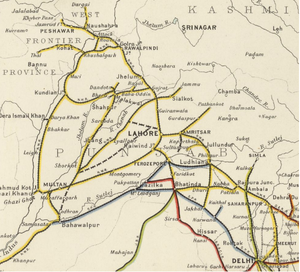 The military and strategic concerns of Afghan-Indian border were such that Francis Langford O'Callaghan, was posted from the State Railways as "engineer-in-chief for a number of demanding railway projects, surveys and constructions on the north-west frontier" [2]. These were initially military and strategic projects and became part of the NWR network on formation in 1886. The Bolan Pass Railway Construction was completed in 1886. The Khwaja Amran Railway Survey in 1887 included the Khojak Tunnel and the Chaman Extension Railway[3]. The Khojak Tunnel opened in 1891 and the railway reached Chaman on the Afghan border.

Later renamed the North Western Railway, by 1905 it was the longest railway under one administration and the strategic railway of the north-west frontier. In 1947, one part became the nucleus of Pakistan's railways, with 4976 of the old system's 6861 miles lying within the new state; the part lying in India was reorganised and renamed as Eastern Punjab Railway.

From an early daate the NWR estabished their own collieries to supply coal for their operations.See separate pages for more information:-

An on-line search of the India Office Records (IOR) records held at the British Library relating to this railway [4] gives several entries, the most relevant as follows: -

There are no staff agreements for NWR personnel held at the British Library in the India Office Records.

Good coverage of the largest Indian railway system, especially from a civil engineering perspective. Lacks a bibliography and poorly annotated. [Slides of the photographs used form a collection deposited at the Cambridge South Asian Archive together with copies of the North Western Railway Magazine, the monthly staff magazine edited by the author.]