From FIBIwiki
(Redirected from Medal)
Jump to navigation Jump to search 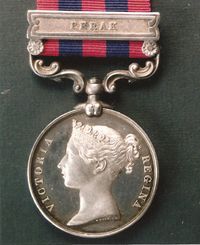 See Medal Rolls for details of records of names of recipients, including those in the India Office Records.

Nb. Years given are the date the action occured, not the date the medal was first issued as in some cases this was decades later.

For the India General Service Medal 1908 - 1935, clasp Afghanistan NWF 1919, it appears that those still in India at the time the medal was issued, were issued medals by the Government of India. If the bottom "claw" which attaches the medal disc to the suspension is a "double" one, this feature generally indicates an Indian issued medal.[4]

The Long Service & Good Conduct Medal (LS&GCM) is a medal awarded by the British to members of the British Armed Forces who have completed 15 years (12 years for Officers) of service with exemplary conduct.